WhatsApp is one of the most popular online messaging Apps in the world. It boasts of over 1.9 billion users in 2019 who send a combined 60 billion messages every day. As you know, Facebook acquired WhatsApp a few years back and has recently been in the news for the new Whatsapp privacy policy that has damaged the trust of it's user base. In case you were wondering how Facebook monetizes Whatsapp, these new developments make things a little more clear. The new Whatsapp privacy policy has given users an ultimatum - allow Facebook to access a lot more of your Whatsapp data, or stop using the App. Since this comes after Whatsapp chats were found indexed on Google Search results and other questionable behaviour by the big tech companies, the App's users are thinking twice before accepting this new policy. 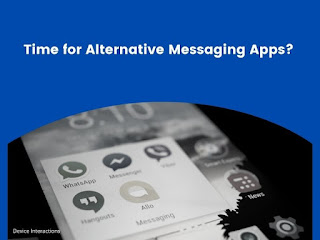 WhatsApp has always been a very flexible app when it comes to online messaging. You can easily send text messages, images, videos, voice messages and even have video/voice calls on it. Sharing documents, contacts and locations to individuals and groups has made communication much easier than before. There's no doubt that it is a great App, but the question now arises - what's the real cost of using a 'free' service like this one?

Ever since the controversy about Whatsapp's privacy policy arose, there has been a strong shift to alternative messaging Apps. The re-arrangement has begun, and Signal and Telegram have started emerging as clear leaders in the alt-messaging niche. And since there is a massive change happening, it makes sense to look at all the alternatives in order to make an informed choice. Here are 5 great alternative messaging Apps that can replace Whatsapp and help you with communication in the digital world.

Signal was founded by Moxie Marlinspike and Brian Acton. Brian Acton happens to be one of the founders of WhatsApp as well. Signal has become a very popular messaging App and is designed from the ground up to provide a high level of privacy and user security. It is available for Desktop as well as iOS/Android Mobile Devices. It is open-source and its code is pre-reviewed which means that its privacy and security is regularly checked by independent experts.

Getting starting with Signal is extremely easy. After installing the App and setting up your Account, you can link the app to your iPad or computer, even if your mobile phone is switched off. Signal's biggest strength is its focus on privacy and security, which means that it allows encrypted texts, calls and group calls, and even allows gif searches and emojis.

It's end-to-end encryption is trusted by most users. And it is effective - so much so that it is extremely difficult for anyone, even Signal employees, to spy on your conversations. You can also enable additional security features such as requiring a second password (other than OTP) to log into Signal on new devices, biometric authentication and more.

Signal is a great alternative, especially since it was started by an original founder of Whatsapp who publicly expressed their displeasure about Facebook's strategy after acquiring Whatsapp. Signal is run by Signal Foundation, which is a non-profit and will therefore be less interested in exploiting users for their data. 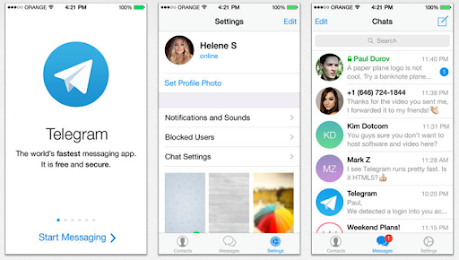 Telegram is a free, cross-platform, cloud-based instant messaging, video calling and VoIP App. It offers end-to-end encryption for all communications, whether it be personal or group chats. Similar to WhatsApp, it uses a double-tick system to indicate when someone receives your message. Other than usual texting, Telegram brings additional features like super groups of up to 100,000 people, public channels, authentication, secret messages and more.

Telegram has attracted customers with many features that distinguish it from WhatsApp, like the ability to share files up to 1.5 GB, self-destructive messages and end-to-end encryption in secret chats. The most popular feature of Telegram is it’s “secret chat” mode which is made possible by the services end-to-end encryption, under telegram’s MTP rote messaging protocol which nations worldwide have failed to crack. With the self-destructive feature, you can set a timer, after which your message gets deleted automatically.

Telegram offers great one-on-one Voice and Video calling functionality. It is a matter of time before they roll out some more group-focused features.

Telegram's App is open source and free. The parent company of Telegram was based in Russia, Germany and now is headquartered in Dubai. Although it does not intend to maximise on profit with this service, Telegram is not structured as a non-profit as yet. Their monetisation approach will be donations and freemium - where some features are free and others are unlocked with a monthly subscription.

With end-to-end encryption and a simple interface, the Wire App is a great alternative to WhatsApp. It was created by Skype co-founder Janus Friss. It offers a free personal account and paid business plans with additional support and features.

Backed by very clear voice and video communication, it also offers some more great features. To sign-up, you need to provide your phone number and email address. Wire provides 1:1 and group screen-sharing, which not only allows you to share information with your team at work, but also works well for playing games in a group, collaboration and workshops.

Available for all major platforms, you can log in your account from eight synced devices. Wire lets you format your text with bold, italics and other options, and also lets you create lists within chats. The user interface is very user-friendly. With easy optimization of the file size for easy sharing and set timer to delete messages for added privacy, it brings you capabilities that other Apps don't.

Wire is a subscription-based App, meaning that you pay a certain amount every month to use it. Upfront paid Apps now seem safer than free Apps with secondary monetization strategies like Whatsapp.

This is one of the only Apps we found that not only have your personal communication covered but also help you with professional and work collaboration.

The Discord app has always been a popular choice amongst gamers. No doubt discord is a community for gamers built around playing games, but it does offer features that can compete with some messaging Apps like text messaging and voice calls. Discord is no longer just a platform for gamers but is fast becoming a niche alternative to WhatsApp.

Skype is one of the world's best-known Apps for video-calls. Keeping video calling at its core, Skype has added some peripheral features as well. This updated version lets you send text messages, images and files to other users in addition to voice and calls.

backed by Microsoft, Skype has left other enterprise chat applications in the dust. Skype is very stable when it comes to making calls, be it video or audio. The sound quality and video quality on the skype is far better than its competition.

While it doesn't necessarily provide too many additional features, it does one thing but does it well.

Whatsapp is going to have a tough time retaining its users. While it strategizes on damage control, people are moving onto other applications for better security, privacy and treatment of users. Telegram and Signal have seen meteoric increases in the number of their users. Millions of new users joined them every single day in the second week of January 2021. Other alternatives like Wire add features that help you at work and in enterprise settings.

The biggest challenge for an alt-messaging platform is going to be herd adoption, since it is only convenient for a user to be on a platform as long as most of their contacts are on the same platform as well. We can only wait and see what happens to Whatsapp once it's new take it or leave it privacy policy enforcement gets implemented.

There are some really good Apps that challenge Whatsapp and may even uproot it from its position at the top. Which one is your favourite?