First, let’s talk about the feature that you will interact with the most - the Display. Both the Mi Band 4 and Honor Band 5 feature displays with similar specifications, 0.95” with a resolution of 120x240, which translates to 282 PPI and makes both the displays look crisp and sharp. Both the displays are made with 2.5D curved glass and use AMOLED panels, so they are colorful and vivid. Below the display, there is a capacitive touch button on both the bands, although the one on Honor Band 5 is more visible, while on the Mi Band it is more discrete. In outdoor conditions, both displays are easily visible, but the Honor Band 5 takes the lead here as the legibility is just a tad bit better.

In terms of their design, both the bands look simple and sleek, but take different approaches in doing so. The Xiaomi Mi Band 4 has a more rounded design and looks more modern. The Mi Band 4 comes only with a black body, but the strap is easily replaceable with that of last year’s Mi Band or with cheap third-party bands that offer variety of styles. Mi Band 4’s strap is thin and narrow using a popper to fasten the band. On the other hand, the Honor Band 5, takes on a more rectangular design with a traditional watch-like buckle to fasten the strap, this will help the band to stay secure during physical activities compared to the Mi Band’s pip-and-tuck strap. The strap of the Honor Band 5 is wider than the Mi Band and thus looks more like a regular watch and provides a more premium look. You can also swap out the strap using the buttons on the bottom to give it a different look. Honor has launched the Band 5 with 3 different options for the straps. Both bands weigh around 22g, thus being light and comfortable.

Now for the most important aspect of a fitness tracker, the functionality and tracking capabilities. Both, the Mi Band 4 and Honor Band 5, offer great features and go head-to-head in their tracking. Both bands have basic features like heart rate sensor, pedometer and sleep monitoring. The Mi Band 4 has a new activity sensor which helps it identify the type of workout you are performing and track the activity. Both the devices are also water resistant up to 50 meters, although if you want to track your swimming, the Mi Band 4 can recognize 5 different swimming styles while the Honor Band 5 can recognize 4. The Mi Band 4 will record the swimming pace and stroke count, whereas the Band 5 will also record calories and SWOLF (Swim Golf) score.

Both bands support sleep monitoring, though the Mi Band 4 will monitor your sleep only during the night and just record the duration of your deep and light sleep, while the Honor Band 5 comes with Huawei’s sleep monitoring program which will also analyze sleeping patterns, quality of sleep and identify sleeping disorders; and provide suggestions for a better sleep. Honor Band 5 will also monitor sleep during any time of the day. One feature, that only the Honor Band 5 packs which is missing from the Mi Band 4 is the Blood Oxygen Saturation (SpO2) sensor. This feature might not be used very often but when you are looking for the best fitness tracker, every feature counts.

Both the bands offer 24/7 real time heart rate monitoring and will alert you when it exceeds a certain threshold. Activities such as cycling, running and walking are tracked on both the bands. Measures of heart rate, distance travelled, and calories is kept on both, while none of them might be 100% accurate, the Mi Band 4 produces slightly more accurate results.

In terms of connectivity, both bands offer Bluetooth 5.0 and can display notifications and incoming calls. In the software department, both offer a similar experience. You can select different watch faces from many options on both the bands. Other features such as alarms, stopwatch, do not disturb, find my phone and music controls are found on both the bands. In their mobile applications, Mi Band supports various different ones including Mi’s Fit app, whereas the Honor Band 5 is limited to Huawei’s Health App. In both the applications, you can set goals, alarms and see detailed analysis of your physical activities. 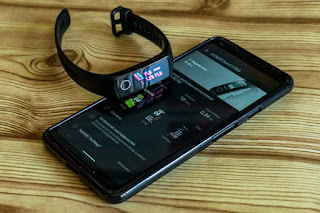 Battery life is one of the most important aspect of a fitness tracker as no one finds it convenient to charge their fitness band every day. On paper, the Xiaomi Mi Band 4 has a larger battery capacity of 135mAh, compared to Honor Band 5’s 100mAh. This advantage also translates to the real life user experience as the Mi Band 4 gets up to 15 days of battery life, whereas the Honor Band 5 finds it difficult to make it past 7 days. Even though the battery life depends on various factors such as screen brightness and duration of physical activities, the Mi Band 4 will outperform the Honor Band 5 in this department. Both the bands charge via dedicated docks, although you need to take the Mi Band out of its strap to charge, whereas the Honor Band 5 can be charged as it is. The Honor Band takes up to 1 hour to reach full charge and the Mi Band 4 due to its larger battery, takes a bit longer.

Both these bands provide excellent user experiences and which one you chose totally depends on what you want from a fitness tracker. If you like more detailed statistics and a better display, the Honor Band 5 is a good choice for you. If you are looking for a longer lasting battery then your choice can be the Xiaomi Mi Band 4. 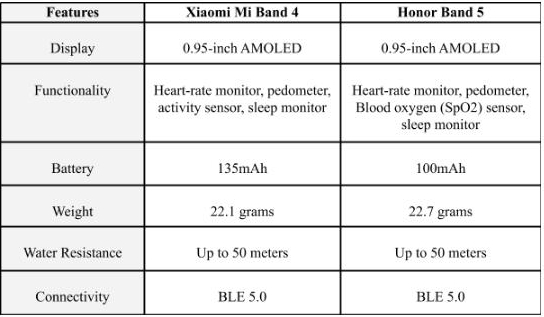 Overall, the Honor Band 5 offers more features and a slightly better user experience except for the battery life. Given the near-identical price points, our choice will be the Honor Band 5, while the Mi Band 4 is at a very, very close second place.